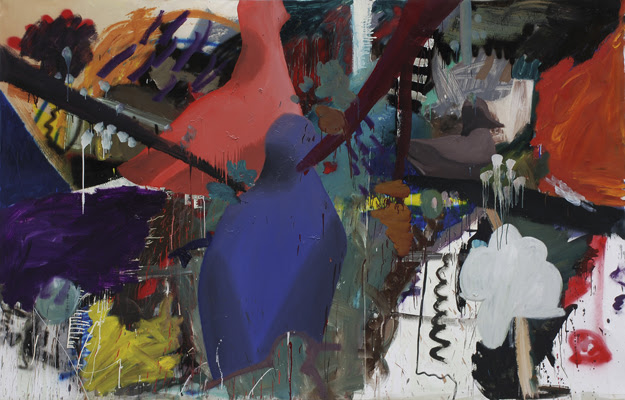 An idealistic picture of the artist as a hero

One day in the studio

One day quite suddenly our artist trips over some brushes and is speared by his own wooden
slats. Was it coincidence or fate? We doen’ t know much but what we do know is that death
surprised, overtook and swallowed him, the rest of the story is a blessing in disguise. Our
artist finds himself back in the skin of a cock and realizes that he is reborn again. However
for A., still confused, confusingly this magical event is suddenly interrupted by the farmer's
axe flying towards him. While this is happening early morning sunlight spills onto the farm.
It begins to stink. The Cock's head, or should i I say his dead leftover, is half visible in the
corner. A. strangely ‚ knows’ it belongs to him. Also A. becomes aware of a great emptiness
inside of him which this deals probably has to do with the fact that he has lost his his mind.
For A. there will be no more talk about love, life and artistic ambitions. Nevertheless A.
remains most alive. Honestly, I, the narrator, can tell you that I have already heard of these
types of cases back in 1946, Mike the living headless chicken for example, but back to the
actual event. A. has no head and so I must implore you to ask “ What's the point?” furthermore
we should even consider “ If he is still an artist at all? And what is this story about anyway?”
To answer these imperative questions we must consider the facts which are: The life of the
headless A. goes on and most important of all:
Now A`s hands are now tied and all bridges to the past have collapsed, he realizes
immediately that he 'feels' satisfied as a headless animal. Can you, dear reader, sympathize
with that? A. is free, he feels free, he truely understands! As an artist he always wanted too
much. Everything had to be appointed in his life and embraced by his will. Now he no longer
wants to be special, he is simply is special. His handicap led to his own personal freedom.
It's just a matter of time until A. will learn to cope with his external disability. Then he will
rise to the top of the dunghill (the art world) and will start to sing his silent song.

Furthermore there is another thing I must say:
The state before the artist was a headless cock

-He worked hard and each day he woke up early,
-He sought,
-He strove for quality and truth,
-He secretly was searching for confirmation,
-He took great pains,
-He was not ashamed by the desire to live through his art,
-A. wanted to communicate,
-He always had a message,
-Sometimes (on purpose) he had no message,
-He took issue with key texts and philosophies, in addition
-In addition He he questioned,
And yet he secretly enjoyed the taste of fame, for example: He went regularly too exhibitions
in which his paintings were shown, looking at the people who in turn were looking at his
paintings,
-He had imagination,
-Late in the evening he made meditation exercises and most important of all:
-Everything had its place
H.A.

psPS: This text is inspired by the tragic death of whiskey brand founder Jack Daniel
Posted by www.rcderuimteamsterdam.com at 17:53